Easter 2019, officially known as Lil D in Grunnyland, began on April 18th, 2019 and was slated to run until May 1st until being extended to the 5th following server issues.

The event is inspired by Lewis Carroll's fairytale Alice's Adventures in Wonderland.

While there is no real plot to the event, a setting and a group of characters has been established.

The event takes place in Grunnyland, a parody of Wonderland. It is a world inhabited by bunnies, grunnies, and LabTechs. Those presented during the event are: 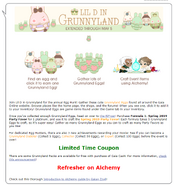