Following some server maintenance on August 26th, 2004, the event was originally scheduled to launch August 27th at 6:00pm (PST). However, problems with the servers persisted and the event was postponed to the following day.[1] The delay drove Gambino to leave an aggressive update on the situation later that night:

Those LOUSY Admins... What do I pay them for?! BWAHAHAAAHAA Well, anyway, I got them working to the bone on MY LATEST EVENT... YES, the FIRST GAIA OLYMPIC RACE!

Stay tuned and I'll keep ya posted whilst I continue to flog every single one of them until they get the event rolling.

The complications persisted into the 28th, causing the event to be pushed back to the 29th instead due to bad weather.[2] Gambino updated users on the situation, once again showing his frustration at the circumstances:

Blaargh, the weather has not cooperated and the race has been postponed. Damn the Gaian Gods... I AM LOSING PROFIT EVERY MINUTE!

The race will begin Sunday morning, BE THERE BWHAHHAHHA! [2]

On the 28th, all of Gaia was decorated with race markers in anticipation of the event. A large "START" banner was hung over Gambino's mansion on Isle de Gambino, with small marker flags dotting the path through Port of Gambino, Bass'ken Lake, Barton Town, Barton West, Durem Reclamation Facility, all the way to the "CHECKPOINT" banner hung in the southwest corner of Durem.

Gambino personally hand-picked two contestants from each major town in Gaia to represent their home. Each contestant had a unique set of strengths and weaknesses that would affect their odds at winning the race.[3] In addition, they all moved at different speeds from one another.

With the resolution of repeated delays and preparation for the event complete, the race finally began on the morning of August 29th at 10:30am (PST).[4] The first lap of the course would see the contestants race from the starting point on Isle de Gambino, south through the Port of Gambino and Bass'ken Lake toward Barton Town, then west through Barton West to the checkpoint in Durem. The second and final lap was a race back to the starting point.[4]

Gambino hosted the event from his mansion, leading to an event page with a forum (accessed by clicking the "VIEW THE FORUM!" button) where users could settle in and discuss the race as it happened.[3] A separate event page (accessed by clicking "VIEW THE ACTION!") featured links to each of the maps which showed sprites of the NPCs racing, allowing users to follow the race in real time with added commentary from Gambino who also acted as MC.[4]

In the heat of the action, Gambino had completely forgotten to announce the launch of the event which had been ongoing for the last 3 hours. He posted one last response to his thread in Announcements with a link to the event page before returning to the race:

I got so excited with the start of the race today, that I forgot to tell you all about it here...

Welcome to the 1st Gaia Olympic Race! THE RACE HAS BEGUN!

To follow along with the race, just watch the maps, and read all my witty commentary HERE! BWHAHHAHHA! [2]

Below is the full transcript of Gambino's commentary during the race: 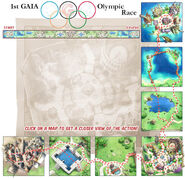 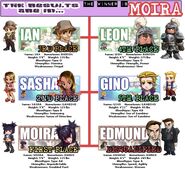