Halloween 2004, sometimes abbreviated as Halloween 2k4 or H2k4, covered a series of events starting on October 18th, 2004 and culminating on November 1st, 2004.

On October 18th, Johnny K. Gambino announced in his journal that construction had begun on a secret test facility underneath his mansion, and that the latest innovations to come to Gaia had all been a part of that plan.

That same day saw the unveiling of the mysterious organization "G CORP", Gaia's largest manufacturer of biological medicines and advanced technology, dedicated to scientific, economical, and military advances. The man behind this company was none other than Gambino himself, working alongside a group of scientists known as "LabTechs".[1]

Gambino had announced that G CORP was heading in a new direction with its research, laying off several members of staff and bringing in new hires. He went on to ask staff for their opinions to help "facilitate" new staff schedules. Responses were varied, but largely positive, save for the redacted post left by LabTech013 on the 19th:

Don't LISTEN TO THEM!! They are going to UNLEASH HELL ON EARTH!! WE MUST STOP THE--

We regret to inform you that LabTech013 is no longer employed at G CORP. He was let go with the last series of layoffs. Please do not attempt to contact him through this address any further. Thank you for your cooperation.
-G CORP
"Making a difference..."

Prior to this, LabTech013 had also tried to convey his findings through his journal, which was also redacted. Several questions started to arise due to his behavior prior to being "laid off". On the 20th, Gambino addressed these rumors in his journal, stating that 013 was just a "construction worker" and a "drama queen", and that the secret test facility was actually a new pool/jacuzzi combo being built for his son Gino's birthday on October 31st. His statement on the matter left a lot to be desired.

On October 30th, Gambino finally opened the doors to his mansion and the party had officially begun:

I hereby am cordially inviting everyone in GAIA to come to my Halloween Bash on Saturday, 10/30/04 starting at 12pm PST (12am GST).

So be there or be square!

Upon arriving to the mansion, guests roamed the halls, exploring everything from the main ballroom, to the gardens, to the bathrooms. However, they quickly noticed that Gino appeared to be absent from his own party. Instead of a grand birthday bash for his son, it seemed that Gambino's lavish home was the host of LabTech062's retirement party.

Cindy Donovinh was hot on the scene of the disaster, reporting for GAIA 9 Action News:

The Halloween party of business magnate Johnny K. Gambino erupted in terror as the outbreak of a mysterious virus caused the dead to rise up and attack the living. The party was disrupted by the arrival of several of Gambino's own LabTech team, scientists who work in his highly secretive G-Corp laboratory. The LabTechs had apparently become infected with the virus that they were attempting to synthesize, and began exhibiting bizarre and violent behavior. Several Gaians were bitten by the infected LabTechs, causing a massive outbreak of "G-Virus" within the Gambino Mansion. Gambino issued shotguns to those partygoers lucky enough to avoid infection, and a brief battle was waged between the infected "zombies" and the uninfected Gaians.

With the battle growing increasingly hopeless, G-Corp security chief Bucho was called in to put a permanent end to the situation. Bucho deployed an explosive, virus-killing superweapon known as the Silent Flash, which obliterated the Gambino mansion.[sic] Those infected Gaians survived who the blast[sic] were cured by the mysterious vials of liquid that a man known as LabTech X sold prior to this event, which raises questions of whether some employees of G-Corp knew in advance that this outbreak would occur. 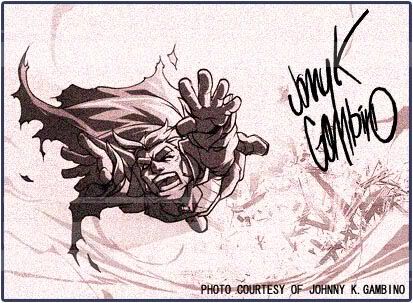 Tragically, Gambino's son and sole heir, Gino Gambino, has been missing since the explosion; he is presumed dead.[4]

The mansion and the underground lab were obliterated in the blast caused by the Silent Flash nuke, leaving them in ruins.[5] Gambino had managed to survive, but was left penniless and powerless. He remained desperate until he felt inspired to search for Gino 55 days later, who was still missing.

In addition to the events at the mansion, the shopkeepers all dressed up in costumes for Halloween, and gave out candy. If one collected enough candy, they would then be able to trade it to Jack, a mysterious figure who represents the spirit of Halloween on Gaia, for a grab bag containing a prize.

A flashback of the zombified LabTechs.