Half human / Half Titan

Johnny K. Gambino (Johnny Kage Gambino) was formerly one of Gaia's most famous social Icons. A charismatic, self-made multimillionaire; he was quoted as being 'the most beloved, most hated, most powerful and most controversial' citizen in all of Gaia. So much so, that his name was said to be 'synonymous' with Gaia itself.

He hosted many of Gaia's formal events. However, he also was responsible for a lot of bad occurrences that happened in Gaia. Enough so, that he could be considered a villain. Johnny was behind both Zombie outbreaks, as well as sparking the war between humans and vampires.

But despite all his self-centered and careless behavior; he was a fiercely devoted father to his biological son, Gino Gambino, who he loved dearly. And always wished for him to succeed and be happy.

For much of his life, he harbored a deep hatred of vampires; due to the death of his wife at the hands of Vladimir Von Helson. He was never able to come to terms with her death, and it was for this reason that he always showed a sharp distaste for Ian.

He was the first plot-related NPC to be introduced on Gaia. He has hosted several large events, including the Gaia Olympics, the Halloween Bash of 2004, and the First Anniversary Ball.

During the Halloween event of 2004, he was head of the ambiguously sinister biotechnology company G CORP. His involvement with this resulted in the loss of his mansion and his son, Gino. During Christmas 2004, Gambino searched for Gino, eventually finding him alone and sans memory. In subsequent months, he managed to get himself kicked out of the Von Helson's anniversary party, which started Gambino off on an initiative to regain his power.

Seeking donations, he started wandering the Isle de Gambino, and a donation bar appeared. Curious users donated millions of gold, and Gambino's mansion remade itself. It actually remade itself MANY times over, as Gambino proceeded to construct the monstrous Tower of Gambino, a ridiculously large metal compensatory ego-trip that stretched over four maps, with a huge G CORP logo on the top, as well as a new mansion.

Gambino climbed to the top of the tower and proceeded to go completely insane, laughing maniacally and selling anti-Von Helson picket signs. After many days of maniacal laughter, a new plot update came out, where Gino makes his way to the top of the tower and regains his memory. As the newly united father and son are about to embrace, however, Gambino was shot by an unknown party, and fell off the tower; as his tower fell with him. As it fell, it crushed the Von Helson Mansion, planting a new mansion owned by Gambino in the place of the old. Gambino was not seen for a full year after that incident.

During the plot events of April Fools 2006. it was revealed that Gambino had been attempting to induce more aggressive and competitive traits in his son, making him a fit heir for the Gambino name. However, when Gino went missing and lost his memory, Gambino got desperate and injected himself with the trait-enhancing formula. It caused him to go insane, inducing hyperagressive tendencies in the already unstable Gambino. When he was shot in the chest and began to fall off the tower, Gino dove after him. As they fell, Gambino's altered cellular structure deconstructed itself and merged with the falling boy, ultimately saving both their lives; and causing the changes in Gino that happened during the time between Tower Day and April 2006.

As Gino confronted LabTechX during the duel on April Fools, his body mutated and he threw both LabTechX and himself off the Barton Cliffs; in response to an unknown liquid injected into him by LabTechX. After the cataclysmic explosion, Johnny K. Gambino was revealed to still be alive.

He was eventually felled by a second assassination attempt.

It was eventually revealed post-mortem, that he was half Titan.

A Memorial Statue was placed in his memory. And Gaian(s) can still visit it today. 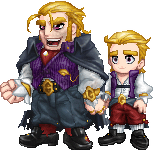