LabTech123 is something of an enigma. Originally, he was one of the several LabTechs at G CORP, working for Johnny Gambino.

During the entire Halloween 2004 event, he never posted, never used his journal, and generally never did anything much with the plot. The night of the Halloween Bash, he posted, making a somewhat nonsensical statement about how he wasn't able to get his internet working. During the Bash, he was the only G CORP labtech to remain human. He resurfaced at the Second Gaian Anniversary Ball, where he wandered around absentmindedly, saying random phrases in Chinese and handing out party favors.

After the ball, he again disappeared. His next plot role was as a doctor, helping Sasha nurse Gino back to health. During the manga, Sasha and the others referred to him as "Doctor 123", as he was apparently working at a free clinic.

During the Halloween 2005 event, 123 was hired by Gino to continue his work at G CORP. He quickly recreated the G-Virus from a Grunny DNA sample. He was shortly interrupted by LabTechX, who released the Grunnies into the mansion. There is no word on his status since the Halloween update. 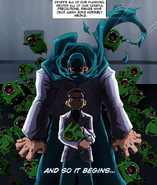