LabTechX is one of the Gaian plot's enigmatic characters. He was originally introduced during the Halloween 2004 crisis, when he appeared at the Marketplace selling hundreds upon hundreds of Vials of Unknown Liquid. These vials caused much confusion in the population when released, and were eventually found to be the cure for zombification from the G-Virus. During this time, it was ascertained through PMs with LabTech247 that there was nobody named LabTechX working at G CORP, and that the slot for LabTech010 was unfilled, meaning that X was not intended to be a roman numeral.

After this, X disappeared, not surfacing again until the Second Gaian Anniversary Ball, where he wandered around making ominous proclamations of doom, such as "The storm is coming... Can you feel it?" and "They're not dead... They never die"(There were more, I'll be doing my best to link them here). Also at the party, he was seen making a business deal with the Von Helson Sisters, exchanging a large box for a large amount of cash. It was never clarified what was inside that box, although many suspect it was somehow related to the April Fools 2005 event and the sniper that shot Johnny Gambino.

The next appearance of X was at the Halloween 2005 event, where he came up behind LabTech123, looking VERY large and intimidating, and released the Grunny cages, setting off a zombie grunny epidemic. As of right now, his purpose in doing so was unknown, but it's suggested that he may simply be a chaotic force that enjoys making mischief and upsetting order in destructive ways.

He was later revealed to be a genetic clone of Johnny K. Gambino. 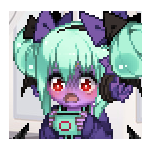 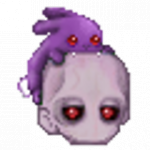