The Easter Bunny first appeared during Easter 2005 and the Von Helsons' Easter Eggstravaganza. Much like Jack, he personifies his holiday, and mostly just appears once a year.

A hulking mechanical creature with an oversized carrot, he caused mass waves of speculation when he was released. He challenged users to collect eggs from the mansion, then hid a basket somewhere on the map for them to find. During the November 7th update, it was revealed that the Easter Bunny acquired his cybernetic parts after Jack punched him to stop his abuse of Santa Claus. The Easter Bunny's face was deformed, and he was given cybernetic parts shortly afterwards.

During Easter 2006, the Bunny was back, giving out baskets. After collecting ten of the eggs that floated across your screen every ten minutes or so, he would appear at the top of the page next to your eggs, allowing you to click. On the overlay, he complained in agony about his "beautiful face" and then ever-so-calmly gave you your prize for collecting enough eggs.

As time went on, Easter bunny fell into even deeper depression, despairing over his 'ugly' appearance, drowning himself in liquor.

In Easter 2k13, after seeking revenge and being defeated again, Santa forgives Easter Bunny and uses Christmas Magic to restore his face to it's natural state. And together they resolve to work together from then on. 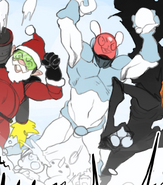